Australia has certainly had its share of memorable advertising and it’s a medium which often causes controversy. The most recent example of using the Sydney Opera House as a ‘billboard’ is without a doubt one of the most controversial, and has prompted public outcry and slogans calling to stop the ‘sales on the sails’. Listen to the podcast at 2SER or below. 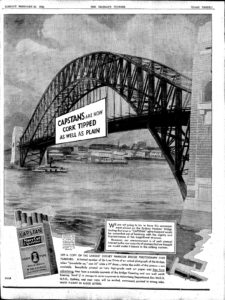 During the 19th century street frontages were used to advertise theatrical productions, and retailers adorned their shop frontages with signage. Bill posters stuck to buildings, pillars and hoarding became so prominent that cartoons of the time satirised Sydney’s vulgar looking streets. In 1854, Isaac & Joseph Roff became the city’s first producer of posters for commercial purposes and very soon other outdoor advertising businesses were established.

‘Ghost signs’, as they are often called, which were painted on city buildings during the 1920s and 1930s have experienced a revival in recent times, one being the Peapes sign which was uncovered last year at Wynyard. Train stations also became hotspots for advertising. Today Museum Station features reprints of posters from the 1930s to the 1950s and many of these are impressive artworks in their own right. Numerous women artists of the early 20th century produced illustrations for advertising companies, including Margaret Preston, Thea Proctor and Hera Roberts. Many other talented Australian artists and writers, including Brett Whiteley and Bryce Courtenay, were also employed by the advertising industry.

Our most famous billboard, the Coca-Cola sign at the intersection of William Street and Darlinghurst Road, was built in 1974. But it was built for that specific purpose. It is interesting to note, that one cigarette company once recognised the importance of the Sydney Harbour Bridge, declaring in one newspaper in 1932:

We are not going to try to have this announcement placed on the bridge, feeling that even a “CAPSTAN” advertisement would be somewhat out of harmony with the dignity and impressiveness of this magnificent structure.

So while we have incorporated art in advertising in the past, this most recent example of advertising on the Opera House attempts to do the opposite – to turn an artwork in itself and arguably the most iconic and culturally significant building in this country into a billboard. And if the protest, petitions and conversations in Sydney and beyond are anything to go by, it’s that the public strongly believe some things are just NOT FOR SALE.

There’s a great entry in the Dictionary by Professor Robert Crawford that looks at the general history of advertising in Sydney.

This post was written by Nicole Cama, edited by Linda Brainwood and originally published at the Dictionary of Sydney.