Nowadays, you can walk into any one of the many bars and restaurants of Sydney and be shown an extensive wine list and an array of scrumptious dishes from around the world. But it hasn’t always been so. Yesterday I had a look at couple well-known restaurants and bars in Sydney that were opened during the twentieth century, as guest historian for the Dictionary of Sydney on 2SER Breakfast. Listen to the podcast below or at 2SER. 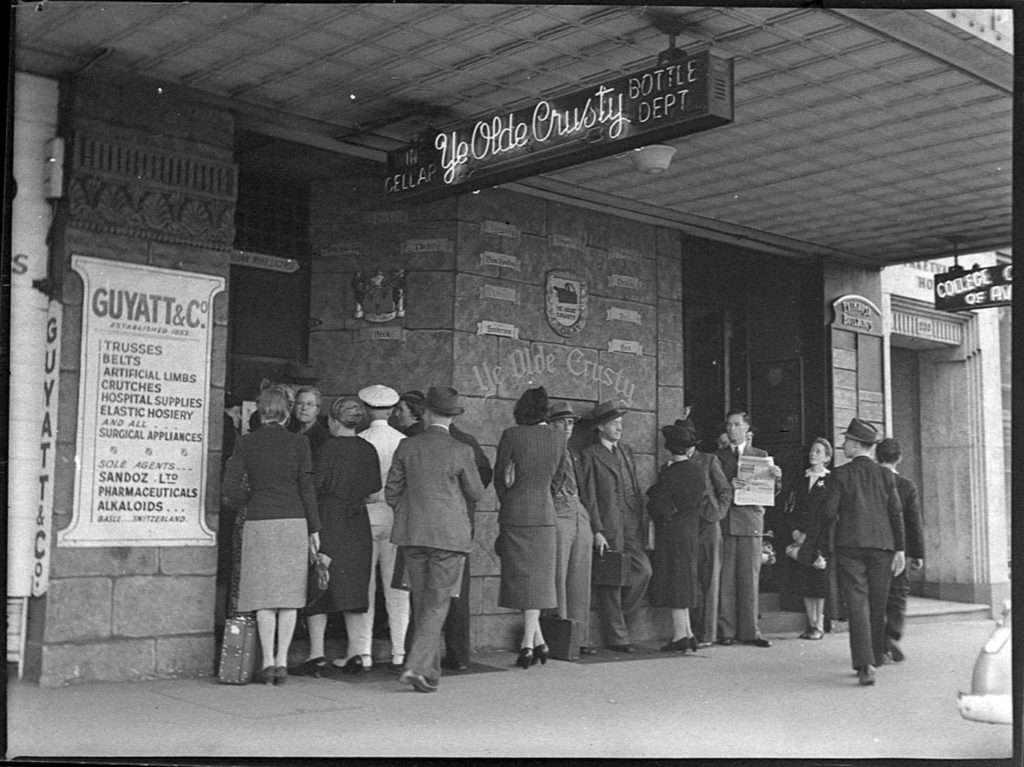 Since the mid-twentieth century, Sydney’s culinary and drinking culture has been completely transformed. Much of Sydney’s change in its dining habits can be connected to migrants bringing their cuisines and beverages to Australia. The way Sydneysiders have eaten and drunk over time has reflected these waves of migration, with the postwar European culinary influences later being complemented by the foods and drinks Asian and Middle Eastern communities brought with them.

Wine cellars existed in Sydney in the 19th century, but in the 20th century they were still considered somewhat unusual, especially in comparison to the well established beer culture and pubs on every corner. Wine connoisseur Leo Buring was born in 1876 in South Australia to German immigrant parents active in the local wine industry. In 1931 he set up an establishment opposite Bridge Street in George Street which he called ‘Ye Olde Crusty Cellar’, looking in particular to promote Australian wine. People would line up outside for their special vintage wines and the venue also hosted many distinguished guests and Sydney celebrations. 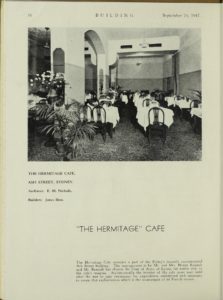 Henry and Jeanne Renault were French migrants who settled in Sydney. In 1942 they opened a restaurant in Ash Street near Angel Place called ‘The Hermitage’. The Hermitage served dishes such as venison in wine, and steak tartare which, although common today, shocked restaurant-goers back then. Jeanne said one patron ‘could not understand us serving raw steak. It was fit only for dogs.’1John Glascott, ‘The Wine & Food Society 1939 to 1993’, 1993, The Wine and Food Society of NSW, http://www.wfsnsw.org.au/colors/our-story.html The pair were also instrumental in the establishment of the Wine & Food Society of NSW. As an interesting side note, in a 1946 Daily Telegraph article, Henry voiced his opposition to the gender segregation that was seen in public bars until the 1950s and noted: ‘Europeans have a different attitude to drinking. They do not drink to get drunk; they drink moderately because it is part of graceful living. It should, be so in Australia, but it will take people some years to learn this.’2The Daily Telegraph, 11 April 1946, p 21 http://nla.gov.au/nla.news-article248496044; The Sydney Morning Herald, 1 June 1954, p 2 http://nla.gov.au/nla.news-article18440587

Sydney’s has also had a well documented love affair with Italian food and wine, which flourished after World War II. On Stanley Street in Darlinghurst, No Name Restaurant opened in about 1954, and only just closed last year. And in 1956, Beppi’s Restaurant opened on Yurong Street. These early establishments became known for their red and white checkered tablecloths and introduced Sydneysiders to the classic simplicity of Italian cuisine.

Interestingly, more recent years have seen a bit of a resurgence in these old school places and styles. We’ve seen this in the interest in preserving Greek milk bars, and in some fashionable venues adopting the retro decor that was seen in the older family run establishments.

What’s a restaurant or bar you miss from your time?

This post was written by Nicole Cama, edited by Linda Brainwood and published at the Dictionary of Sydney.