The NSW State Archives and Records’ exhibition, Blaze: Working Women, Public Leaders, features fascinating stories of women trailblazers in the public sector. I spoke about one such story, that of the Aboriginal activist Pearl Gibbs, this morning on 2SER Breakfast for the Dictionary of Sydney. Listen to the podcast at 2SER. 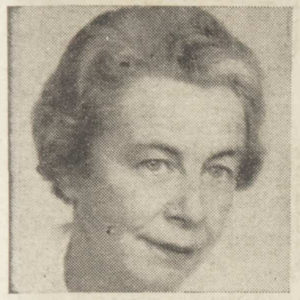 Among the many women featured in the exhibition is Margaret Harper, a paediatrician and infant health pioneer. There’s also Rosette Edmunds, who was our first female professional town planner. Edmunds worked as an architect from 1926 until 1941 and was appointed Civic Survey Officer in 1946 for the Cumberland County Council which oversaw the master plan for Sydney.

Another interesting woman featured in the exhibition is the Aboriginal activist from the 1930s to the 1980s, Pearl Gibbs. She was born in La Perouse in 1901 and worked as a domestic worker in the Potts Point area. She spoke out against the NSW Aborigines Welfare Board’s control over Aboriginal people and, in 1954, became the first woman to be elected to the board. 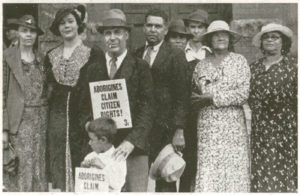 Gibbs was a true trailblazer. In addition to her work with the Aborigines Welfare Board, she was the first Aboriginal woman to speak on radio. She also spoke at Speakers’ Corner in The Domain in 1937, recalling how she ‘shook’ and ‘shivered’ because she ‘was so fighting mad’ at the injustices faced by Aboriginal people. In 1938, she joined the Aborigines Progressive Association and the ‘Day of Mourning and Protest’. Gibbs also suffered personal tragedy when her three children were removed from her care by her estranged British husband.1Paul Irish, Speakers’ Corner at The Domain, Barani, City of Sydney http://www.sydneybarani.com.au/sites/speakers-corner-domain/

Among her many achievements Gibbs founded the Aboriginal-Australian Fellowship alongside Faith Bandler in 1956, which was a group formed to campaign for equal pay and citizenship for Aboriginal people. People have often spoken of her as ‘before her time’. Aboriginal poet Kevin Gilbert described her as someone who ‘lived and breathed, ached and bled Aboriginal affairs’.2Because of her: Anny Druett, ABC Radio National, 26 June 2018 http://www.abc.net.au/indigenous/because-of-her-anny-druett/9912044 and http://www.abc.net.au/radionational/programs/awaye/because-of-her:-anny-druett/9861840

Find out more about Gibbs, and many other trailblazing women by downloading the catalogue or visiting the Blaze exhibition, which is showing at the Whitlam Institute at the Female Orphan School at Western Sydney University’s Parramatta campus and closes on 27 July.

This post was written by Nicole Cama and published at the Dictionary of Sydney.